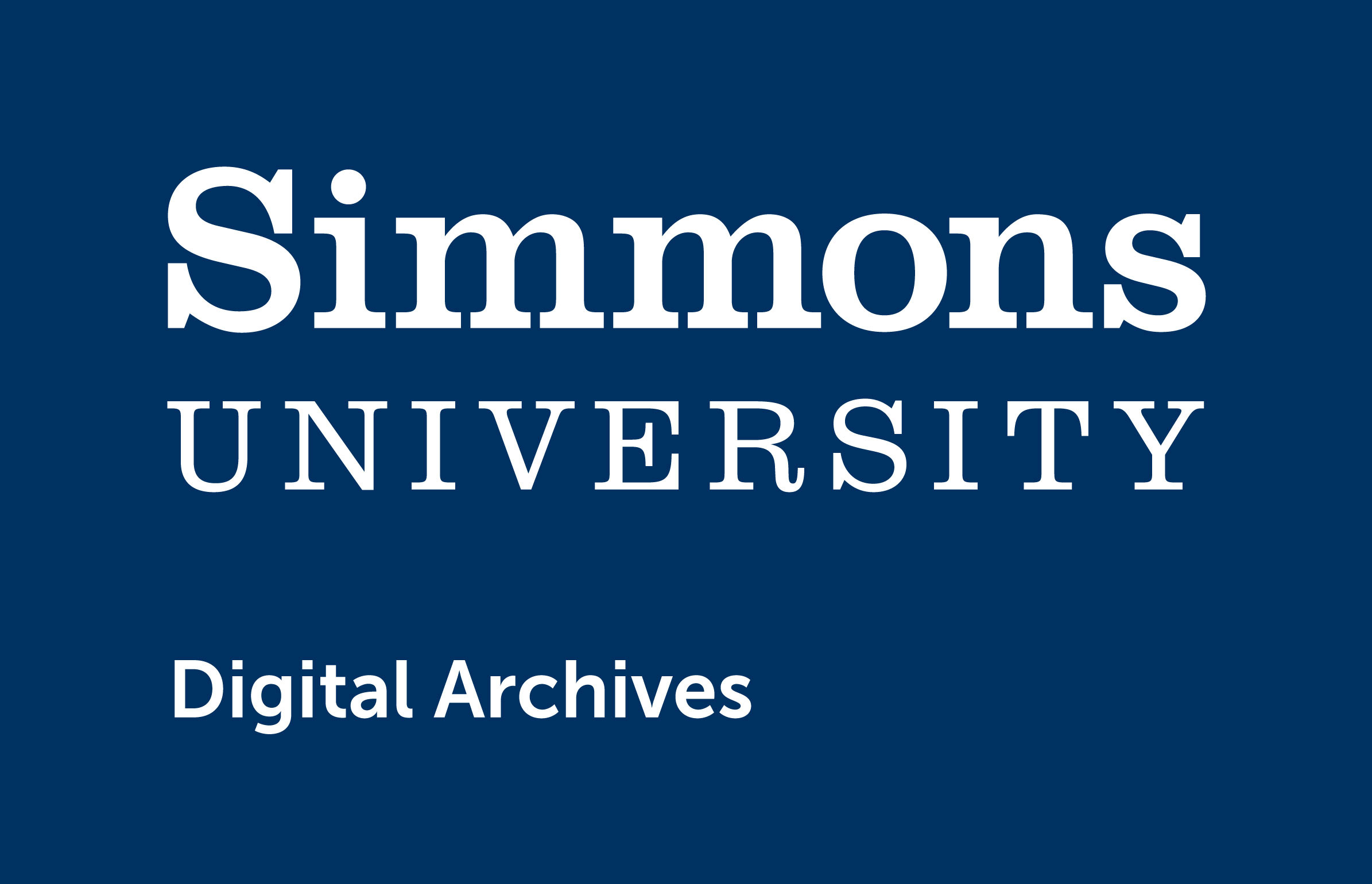 The Simmons University Archives Photograph Collections is a growing collection of photographs related to the history and development of Simmons University. Separated into photosets, this collection documents over a hundred years of Simmons history, including photographs related to academics, student life, buildings and grounds, faculty and staff, and university events. Please note that some of these photographs, especially in regards to student life, may be considered offensive, specifically in terms of historical cultural appropriation. This folder includes materials related to Simmons Commencement, including audio and transcripts of addresses, programs, and related material. This is the official Simmons College course catalogs, containing undergraduate and graduate information about the schools, departments, course listings, and registers of faculty. Registers of students are also included in earlier issues. Between the 1918-1919 catalog and the 1936-1937 catalog, an announcement of Summer Sessions is bound into the catalogs. Throughout the 1960s and 1970s, the catalog was published as part of the Simmons College Bulletin (PC006), which joined together many of the separated publications, including the catalog, the summer session, the register of graduates, the vocational guidance series, the annual report of the President, and the Treasurer's report. Starting with the 2004-2006 catalog, the College separated undergraduate and graduate studies into two separate publications. Starting in the 1990s, individual graduate schools also published their own course catalogs. Please note that the names or descriptions of courses, especially before the 1990s, may include offensive and outdated language, including (but not limited to) courses in social work, nursing, and education. This is a growing collection of course syllabi produced by Simmons University. The undergraduate newspaper, The Simmons News, was first published in October 1923. While the newspaper has changed names throughout the decades, including The Simmons News (1923-1970, 1985-1997) and Janus (1970-1985), it settled on The Simmons Voice starting in 1997. Regardless of its name, however, the Simmons newspaper has always acted as a conduit for Simmons students to discuss College affairs, as well as political and social issues. It also has the distinction of being, at the time of its creation, one of the few collegiate newspapers not under editorial control of either the faculty or administration. Please note that many volumes and issues have inconsistent or nonexistent volume or issue numbers. Original scans were of bound issue copies and converted from microfilm. As such, tight binding may cut off the edges of various issues and photographs may be too dark to see. Also note that some issues of the newspaper, especially in the earlier years, contain harmful, offensive, and racist language and imagery. Description metadata includes verbatim article titles as written in the newspaper. As such, some descriptive metadata might include harmful, offensive, or racist language. For more information about The Simmons Voice, or to request high quality reproductions, please contact the Simmons University Archives at archives@simmons.edu. While titles for early editions of the Simmons Yearbook vary, the yearbook was consistently titled THE MICROCOSM starting in 1910. Early editions sometimes included lists of students who left Simmons before completing their degree, students in certificate programs, and lists of clubs, events, etc. under each senior’s photo, indicating which activities they participated in. Other information includes details on clubs, events, traditions, departments, and faculty and administration. Includes theses and dissertations, undergraduate symposium materials, student zines, and anything else that can be classified as student work

© 2021 Simmons University | 300 The Fenway, Boston, MA 02115
©2022 Preservica
We use cookies so that we can provide you with the best user experience possible. Click Accept to confirm that you are happy with us to use cookies.